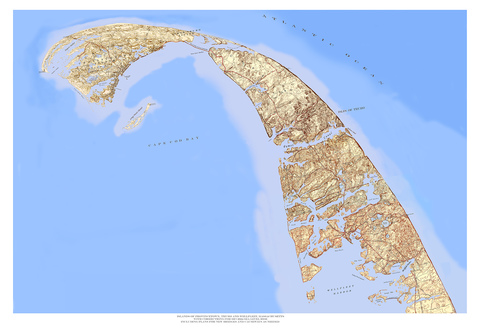 Like many of us concerned with climate change and related matters I have been thinking about how a rise in sea level would affect our lives. Obviously there are places on the earth that would experience devastating change - the Maldives for instance - risk obliteration from these changes. I wanted to look at what would happen to Cape Cod with a substantial rise in sea levels.

I chose to re-map the coastline based on a 10-foot rise in sea level. When I first began this project in 2009, a number of coastal geologists and scientists said that this is impossible in the short run. What we now know is that there are often accelerating effects from climate change - massive hurricanes, tsunamis, and polar ice cap melt could all combine to accelerate the process significantly.

This work re-maps the Outer Cape (Provincetown, Truro and Wellfleet) based on that 10-foot rise. Peninsulas become islands, new bridges are required, the airport disappears, and many dramatic changes are evident. I created this work by hand-altering a U.S. Geodetic Survey Topographic maps to reflect the change.

There is software to accomplish this now, but I wanted to physically move the water in to the land until it reached the first 10-foot isobar on the map in order to more viscerally experience the flooding.